My Venture Into Another Art Form!

THIS IS WHERE IT ALL BEGAN

The Puppeteers had a puppet stage they would set up at each location and present an education and/or "morals" play to the group who asked for them. The group grew and they hired a wonderful lady to head the group. Her name is Pat Phillips. She has a super-positive attitude and I can't remember any time when she wasn't a genuinely affable person. She spoke with her native English accent which, in my opinion, made her even more endearing.  She and her family have long since move on, and I for one, miss her very much! And although she's no longer here in Binghamton, her influence on me, regarding puppetry, has remained ever strong.

The puppets we use are large, foam, characters which you held above your head and their arms and hands are worked with rods.

The one story we use most frequently concerns bullying and ways to deal with it. It's called, "Buzz Off", an original play which has songs to go with it, written by Bob DeLuca. The script underwent several changes through the years, but the bases of the story remains.

has been picked on by a school bully named, Buzz.

He calls Artie names, like "Green", which Artie happens to be, by the way, but even so, he scares Artie and throughout the show, Artie meets friends and family who try to help him through this conflict.

His first encounter is with his Grandpa.

The old sage's advice to Artie was to "Walk Away", and he sings a song to that reasoning.

Next, he seeks out his dog, Dodger.

Dodger's mind is usually on something to eat, however, Artie is surprise when he wishes his dog could talk and help him with his problem, only to find that his dog can talk, and sing as well! Dodger's advice is to stand up to that bully! "Show 'em your teeth!", he tells Artie, and he too sings a song to his reasoning.

His best friend is Samantha.

She's a very chatty, little girl who knows everything and sees herself as a great actress. She wonders if the Bully had any friends. "Maybe if you try to be his friend, he'll stop picking on you!", she offers Artie. And if he doesn't stop, he should go tell a grownup about the problem.

And finally, Artie hears from his own heart.

and he sings a song to Artie to help him feel more compassionate and understanding.

Of course, Artie does decide to "stand up" and confront Buzz, and even though he's frightened. He tells Buzz he doesn't think it's right for him to pick on like he does, and from now on, he's just going to ignore him. But he'd much rather be Buzz's friend than his enemy. He invites Buzz to play Pokeman with him and Buzz is amazed when Artie offers to share his Pokeman cards. Buzz exits happily excited and tells Artie that he'll be back later to play!

The story ends and all puppets take a bow!

Through the years, we done many productions of "Buzz Off", as well as other shows. Pat Phillips had a collection of her own puppets and I became more and more interested in them.

AS OF JANUARY, 2006, THE PUPPETEERS WERE NO LONGER IN USE.

I'm happy to say, during November of 2006, the puppets made an appearance once again!

Invites you to their

"The Season of Good Fill"

A puppet show with puppeteers 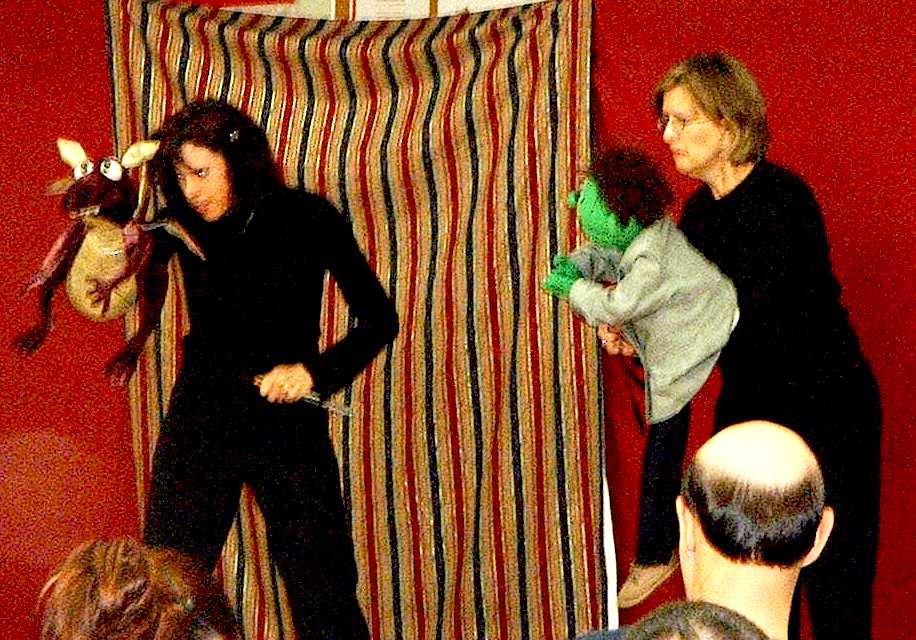 Rachael Leonard as the Sorceress and Patricia Phillips as the Vizier

visit their site by clicking the banner below.

Or visit their new offices at:

I was out of town in Ithaca, with the Mental Health Players for a TV spot we were doing. During a break, I'd stopped in a gift shop and saw this great looking bear on display. I was astounded to find he wasn't just a stuffed bear, but a puppet! I fell in love with him immediately, bought him and took him home. This was in the year of 2000.

I named my first puppet after my grand-nephew, Darrin LaSalle. When he visited with his mom, my niece Jeannine, he loved to play with the large stuffed lion on my bed, "Leo", and I knew he'd love it if I named the bear after him.  Darrin, the puppet, is actually, Filibuster P Chatsworth, a Boyd's Bear© puppet, which is no longer being made. I was so impressed at his fluidity of movement, I am surprised, to this day, that wonderful puppet isn't well know.

Darrin D. Bear's official "birthday" is the same as my own, February 10th. Darrin is a wise guy. He's a comic and his own best audience. He loves to comment about everything an anything. He has a great deal of fun messing with the man holding him! He's an adult's kind of bear, but he has a soft spot for kids and loves to dress up for holidays and special events.

Halloween and Christmas at Tioga Gardens -Tioga, NY - was a real kick for us. The kids interact with the bear and totally forget I'm there at all. I most often play second fiddle to these guys!

Darrin thinks he's in these pictures, but it's really Chester, dressed up like Santa Claus.

Okay... that doesn't make sense, but hey...they're puppets and it's make-believe!

Darrin did get to travel to New York City for the annual Gay Pride Parade and he was a big hit with the onlookers and the marchers. A noni-sexual bear, he is totally at ease with the whole Gay thing. "After all," says Darrin, "Look what I put up with! Why wouldn't I sympathize? And I'm also a bear lover!"

About a week after I'd had Darrin D, I was at our local Boscov's department store and I came across what I thought was a white, stuffed Angora cat. I assumed she was a plush toy and soon discovered she was an little girl's overnight bag! The belly had a zipper in it and a little girl could put a few "secret" things inside as she wished.

I wished to put my hand inside! I cleaned out her insides and soon made a puppet out of her. Beautiful, wide-eyed, and totally sure of herself, she became, "Salome".

On a trip to NYC with Pat Phillips and other friends, we stopped at a puppet store. It was there I found "Balboa". A huge, hairy Orangutan, or is that description redundant? He talks with a pronounced accent, and is very proud that at three years old, he can answer any question you ask him!

On a shelf not far from Balboa, was a small, cloth trashcan which contained a little raccoon whom I now call, "Ricky". Fastidious and ever environmentally mindful, Ricky loves to remind people to not liter.

I happened to wonder into a gift shop in Johnson City and came across my next bear, "LaLa LeBear". She is the identical Boyd's Bear ©  puppet. Of course there are slight differences in all my bears, but parents can almost always tell their twins apart, nes pas?

LaLa is a sweet, Southern bear and is Darrin's cousin. She doesn't care much for boys, because they are...well, ...they're boys! Her heroine is Lucy VanPelt. She loves to shop and show off her new clothes. She got her first outfit at the Family Dollar Store that same day!

LaLa has most recently, February of 2010, been entertaining local audiences and fancies herself quite the diva of song. She had her first solo torch song, "Funny Bear", at a cabaret show at Woodburn Court, downtown Binghamton.

eBay was something I'd been interested in, but not having any real money I hadn't messed with it much before. I decided to see if I could find any more puppets like Darrin and LaLa. Sure enough, there he was! I bid on him and won him for less than I paid for either of the other two. He came home and as soon as I put him on my hand, I knew who he was. Chester DeBear is a backwoods, homeboy and LaLa's older brother. He loves homespun stories and tells some whoppers. He loves kids and reading them stories is his fondest activity! He got to play Santa Claus this year, instead of Darrin, and he loved the storytelling time!

Once again, my curiosity was aroused and I went to see if there was, by chance another Boyd's Bear © puppet for purchase online. This time it took a whole lot more searching but tenacity won out and, as luck would have it, I found one. Again, I got a great bargain and, like Chester, when he arrived and I began to move him about, I knew who he was as well.

His name is "Teddy Downunder", and he's from Australia. He was a lost, wandering cub who was adopted by a band of Koalas who discovered him after he'd strayed from a visiting American circus. He thinks he is a Koala and won't take any word otherwise. He loathes politicians and fanatics of any kind. He likes the simple things in life and loves American food, like pizzas and French fries.

Instead of being a Chadsworth Boyd's Bear, Charlie is a Farnsworth, a soft, straight haired bear which I also purchased for a very good price on eBay!! He's the youngest and the baby of the group. Curious and playful, he loves to be around other children.

Well, that's my family of puppets!

If you would like our services at very low prices, mind you, email me at the address below!

CHECK OUT THESE PAGES

My eclectic, artistic background and bio. I provide a detailed, intimate look at my personal life and background for those of you who hold such interests.

Some of my pencil/pen and ink renditions, cartoons and portraits!

I created transparent, graphic clipart you can use for your email or web pages!

My whole new family and my newest artistic endeavor!

Stories, prose & poetry by yours truly. Still under construction.

Photographic resume of my acting career!

SOMETHING JUST FOR FUN!

Take a walk down memory lane, or drive down in your '57 Ford Fairlane...

What do you remember about the 50s??? What have your parents told you????

Now includes a link to hear Abbot and Costello's hilarious "Who's On First" routine!

All artwork, graphics and logos on this and other pages throughout, are my own and are copyrighted,

with the exception of Theatrical and Business logos used as links to various enterprises.